Jules Gabriel Verne is the author responsible for making some of the most successful and internationally adored adventure novels of the 19th century. First Journey to the Center of the Earth was released in 1864, then Twenty Thousand Leagues Under the Seas in 1870, and finally in 1872 our title of focus, Around the World in Eighty Days, was released under publisher Pierre-Jules Hetzel. Around the World quickly became the most popular novel in his Voyages Extraordinaires series. These 3 titles have been repurposed countless times for film and television, also making an appearance within comic books, video games, opera, and theater. Since 1979, Jules Verne has been the second most-translated author in the world, right up there with William Shakespeare and Agatha Christie.

This particular pen is a special edition of Montblanc’s Midsize Classique model, with a precious blue resin body and cap, celebrating Jules Verne's novel Around The World in 80 Days with a beautiful ballpoint pen. The first leg of travel in Jules Verne’s classic is from London to Bombay by steam boat, so on the cap of this pen you will find ocean waves representing this journey by sea, card suits for the bet that was made at the onset of the novel, as well as a laser-engraved steam boat on the cap of the pen, clearly distinguishing this pen from any other Classique model.

At the top of the cap you’ll find two numbers: 18 for the amount of time it took to travel from London to Bombay, and 80 on the opposing side for the length of the total trip. A black spade emblem sits on the end of the clip, further distinguishing this special ballpoint pen from other Montblanc Classique models.

Watch Warehouse sells only 100% authentic, brand new merchandise, complete with the manufacturer’s packaging and a minimum 2-year guarantee with service or repair by Watch Warehouse, like this MONTBLANC Meisterstuck Around the World in 80 Days Midsize Ballpoint Pen 126342. 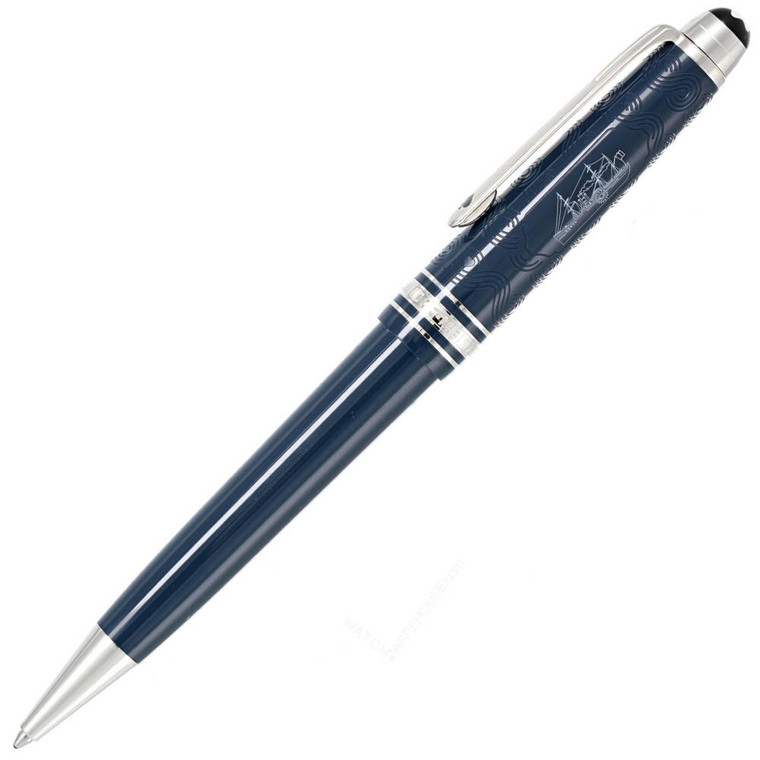