Arthur Conan Doyle is a British writer most famous for the creation of the Sherlock Holmes series of books. Known internationally as some of the best crime fiction ever produced, Sir Arthur Ignatius Conan Doyle produced 56 short stories and four novels during Doyle’s time focused on the adventures of Sherlock Holmes, and many stories have since been published surrounding Sherlock Holmes and his dear Watson by different authors.

Doyle’s parents married in 1855, birthing Arthur on the 22nd of May, 1859 in Edinburgh, Scotland. Arthur faced turmoil early in his life when his father’s addiction to alcohol forced a separation in his family, ultimately sending Arthur to live with Mary Burton, the aunt of his friend, while he continued his schooling. From an early age Arthur became accustomed to writing letters to his mother, many of which were preserved.

Sir Doyle wasn’t just a writer; he actually received his bachelor of medicine and master of surgery degrees in 1881 from the University of Edinburgh, and became a ship’s surgeon. After some time on the sea, he began his hand at a private-practice business that was mostly unsuccessful. During this time he began writing fiction again, something he had explored when he was younger. He would write the very first story featuring Sherlock Holmes and Dr. Watson (A Study in Scarlet) when he was 27 years old. A year later, after some trouble, it was published by Ward Lock & Co. who took exclusive rights to the story in exchange for £25, worth roughly $2,900 at the time. A Study in Scarlet was positively reviewed after its publication by the Glasgow Herald as well as The Scotsman, putting his characters Sherlock and Dr. Watson into the eye of the public for the first time.

After some struggles with his publication house, Sir Arthur Conan Doyle had thoughts of doing away with the Sherlock Holmes character forever, even writing to his mother: “…I think of slaying Holmes, … and winding him up for good and all. He takes my mind from better things.” There was much demand for further Sherlock works, so he raised the asking price to something that he thought would be unreasonable and cause them to stop asking, but their acceptance of his higher wages for more Sherlock content quickly led to him being one of the highest paid authors of his time.

This Writer’s Edition pen from Montblanc celebrates Sir Arthur Conan Doyle, inarguably the most renowned crime writer that we’ve seen. The pen itself is made from a Brown resin that is meant to lend the mind to the foggy streets of London, where most of Sherlock’s crime-solving takes place. Drawn into the cap and barrel you’ll find a classic plaid pattern, this is in reference to the famous plaid coat Holmes would often don. Looking to the clip of this pen, you will find that it is designed to represent a magnifying glass, with the initials “JB” found behind the magnifying glass, meant to reference Joseph Bell, one of Arthur Conan Doyle’s professors whom served as Arthur’s outline and inspiration for the Sherlock Holmes character.

Montblanc has beautifully honored the great Arthur Conan Doyle with this beautiful Rollerball Pen .It’s the perfect gift for any fan of Sherlock Holmes, but also a beautiful piece to own for writers & aspiring authors of all genres. Arthur Conan Doyle was a masterful writer, and his works continue to influence the new generation of writers over 100 years later. 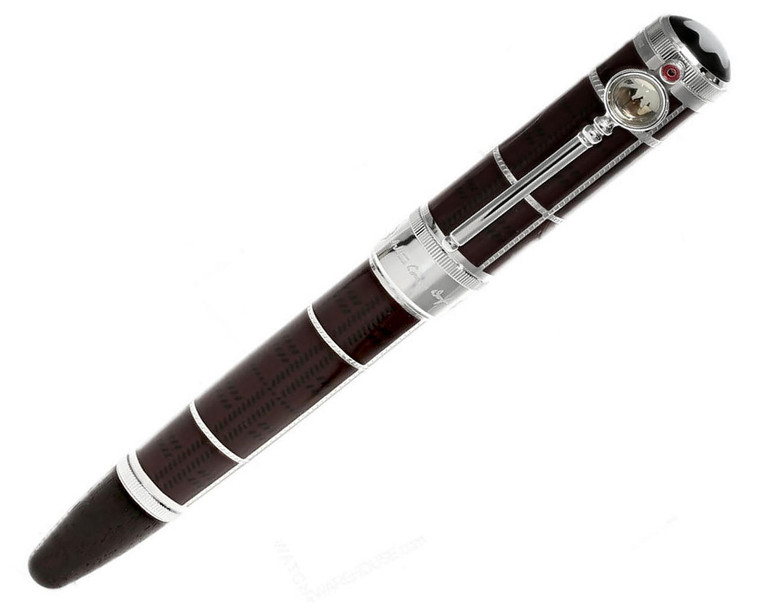