John Lennon, Paul McCartney, George Harrison and Ringo Starr; these 4 original Beatles members are responsible for the Beatlemania that swept the world in the 60s. They forever shaped the face of Rock & Roll around the world, and recorded some of the most successful and influential records to ever hit vinyl.

The Beatles were first formed in 1960 in Liverpool, containing 3 of the original 4 members. The group went through a number of drummers throughout the next 2 years as they developed their sound and evolved from Lennon’s previous band, The Quarrymen. They played clubs across Hamburg and Liverpool, eventually Ringo Starr would join them in 1962. Their first hit single, “Love Me Do”, was released at the tail end of 1962, sending them down the path towards international infatuation that we now know as Beatlemania that swept the world in the 60s.

By 1964, the group had become international stars, seeing success the likes of which had never been seen before in the music industry. In fact, it was The Beatles that brought to normalcy the idea of a band producing an entire Album rather than a single, a practice which is still used by nearly every artist today. They made their film debut that same year with A Hard Day’s Night, the musical comedy starring all 4 Beatles members that has since been honored by Time Magazine as one of the 100 all-time greatest films.

They were the best-selling music act of all time, selling about 600 million units worldwide. They had 15 number-one albums in the UK, 20 number-one hits on the Billboard charts, and countless other accolades in the music industry that have yet to be topped by any other act in the 50+ years since Beatlemania.

This special edition Montblanc pen honors the Beatles, the band who grew to represent & embody the entire counter-culture movement of the younger generation in the 60s. The colorful stripes on the cap and barrel of this pen tribute the costumes that the Beatles wore on the album cover of “Sgt. Pepper’s Lonely Hearts Club Band” as well as their first hit single, “Love Me Do.” The cone of the pen is designed after a button on the mixing table at Abbey Road Studios, and the top of the cap is inspired by the microphone of this same iconic studio. Along the clip you’ll find four mustaches, representing the quartet’s pronounced mustaches in their famous band portrait photo.

Montblanc has done a wonderful job honoring the powerful and lasting impact the Beatles made on the music industry, the youth, and the world as a whole. This beautiful pen features a reliable Montblanc ballpoint writing system, perfect for regular use or collecting.

Watch Warehouse sells only 100% authentic, brand new merchandise, complete with the manufacturer’s packaging and a minimum 2-year guarantee with service or repair by Watch Warehouse, like this MONTBLANC Great Characters The Beatles Special Edition Ballpoint 116258. 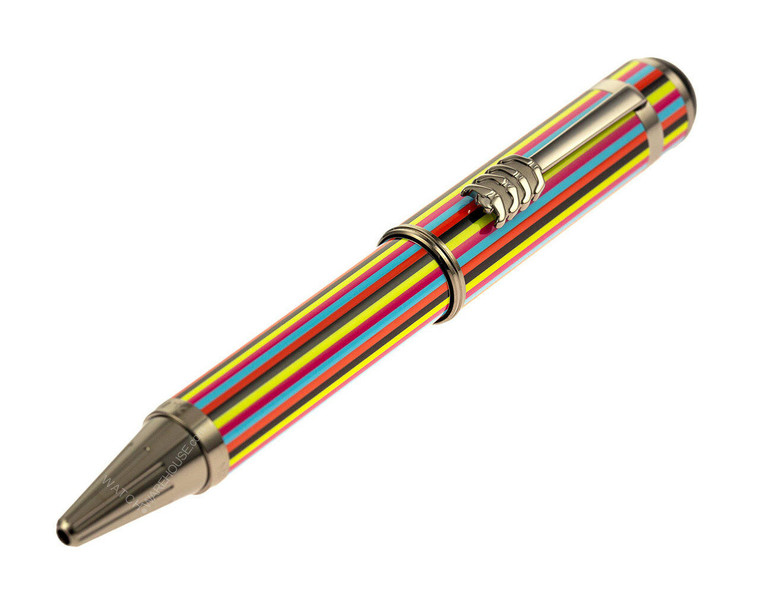