Victor Hugo started his career as a writer at a young age and was, simply put, a literary genius. His first published collection of poetry was released when he was only 20 years old and earned him a royal pension from the King of France at the time, Louis XVIII. Victor Hugo truly committed his life to his craft, eventually producing generation-spanning works such as Les Misérables and The Hunchback of Notre Dame that remain impactful and heavily praised to this day.

Victor Hugo’s works have been adapted for film and theater dozens of times, including as a lovable cartoon accessible to children in Disney’s The Hunchback of Notre Dame. His works helped to shape French romanticism and the art of literature was forever changed by his touch. The Hunchback of Notre Dame ignited the historical preservation movement in France and brought huge popularity to Gothic revival architecture. Even the Notre Dame Cathedral itself provides that most of its present-day appearance was brought about by the success of this one piece of literature. Nearby, at France’s Panthéon Monument, Victor Hugo is honored by Interment alongside France’s greatest and most influential revolutionaries, government officials, scientists and artists.

Montblanc's Writer's Edition Homage to Victor Hugo is a very special  pen collection. These pens are all crafted of precious black resin with fittings coated in platinum. On the cap you'll find the iconic arches of Notre-Dame decorated within the resin. At the end of the clip you'll find a shape reminiscent of a bell ringer, quite like the famous bell ringers from the bells within the Cathedral Notre-Dame. Also on the cap, you will find the signature of Victor Hugo. This particular model comes with a reliable Montblanc rollerball mechanism, perfect for the avid writer.

The precious resin and platinum fittings echo a traditional Montblanc pen, however the details and engravings accurately honor Victor Hugo and his revolutionary writing work, making these pens a unique addition to any collection, or perfect gift for fans of Victor Hugo & his greatest work, The Hunchback of Notre Dame. This set includes a ballpoint pen, a ballpoint pen, as well as a medium-nib fountain pen. 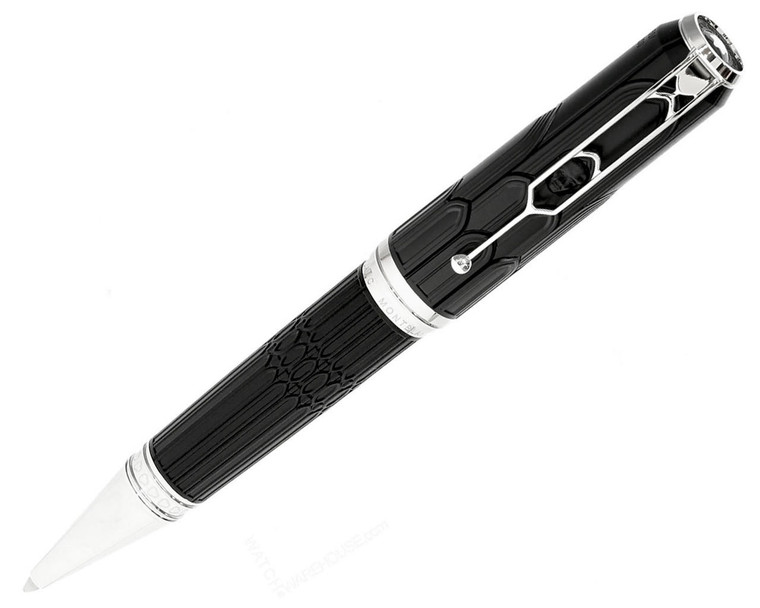