Released in both Geneva and New York City at the same time in 1969, the TAG Heuer Monaco went from another unknown watch model to one of the most recognizable sports watches in the world in just a few short years. The Monaco may have a lot to do with TAG Heuer’s deeply rooted relationship with the F1 and racing communities, but this wasn’t Heuer’s first venture into sports watches by any means.

In 1911 the first board chronograph for vehicles was produced by Heuer, and then in 1916 the “Mikrograph”, a stopwatch with a precision of 1/100 seconds was selected for many Olympic games and other sporting events due to its superior accuracy of timekeeping. The Mikrograph model propelled Heuer into a very favorable position among the sporting communities. Still, it was not until 1969 with the release of the Monaco watch that TAG Heuer as a brand would become forever engrained into the tightly knit racing community.

How the Monaco Came to Be

The first thing you’ll notice when looking at a Monaco is the square-shaped case. This design allowed Heuer to claim the watch as the world’s first waterproof, automatic chronograph watch with a square face (Rolex made a square Chronograph in 1940) and greatly set the Monaco apart from all other sports watches in its class. Similar to the unique design, the story of how the Monaco rose to popularity is also very unique.

During the late 60s Jack William Heuer, the great grandson of the company’s founder, was acting as the managing director and had begun to involve himself in a great many projects to further the success of their brand. Perhaps most important of those projects was project 99, the codename for the project that produced what came to be known as the Caliber 11 movement.

Jack partnered with Breitling, Buren (Hamilton), & Dubois Depraz to produce the world’s first automatic chronograph movement available to the public under the codenamed Project 99. Buren was particularly talented at making very thin automatic movements, which would be necessary if they were to be successful. Breitling and Dubois Depraz both had extensive experience producing chronographs and other advanced watch complications. The end result was the Caliber 11, a groundbreaking watch movement that produced 19,800 vibrations per hour with a power reserve of about 42 hours. 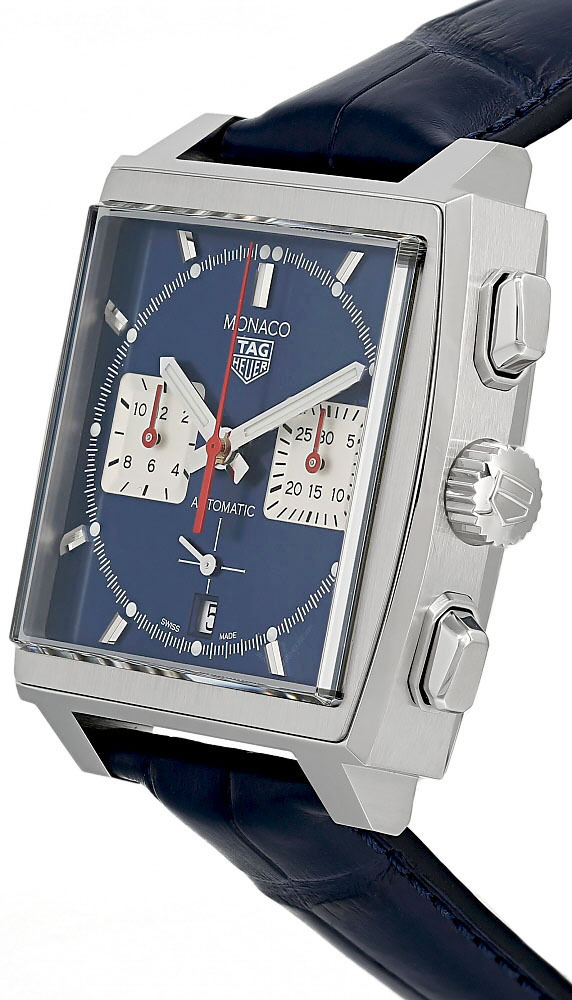 The initial plan with this new chronograph movement was to place it in a Carrera model, a model which Jack Heuer had championed to great success in the years prior to the Caliber 11. They began work on a thicker Carrera case to fit the new movement, and also decided to include it in the Autavia models in production. The Autavia was a watch specifically targeted towards automobile and aviation markets, but Jack wanted something more for this new movement, a watch design that would set the movement (and the brand) apart from the competition forever.

It was Erwin Piquerez from a large Swiss watchmaking industry that actually first presented the idea to Heuer. Piquerez had just patented a new square-shaped case that employed a new method to make it completely waterproof using 4 notches that clipped into the back, the first of its kind. Jack Heuer immediately knew this was the out-of-the-box design that he was looking for and came to an agreement to purchase the exclusive rights to the waterproof case design. The title “Monaco” was already aimed towards the racing community, paying homage to one of the most exciting F1 races, the annual Monaco Grand Prix. Even still, not even Jack Heuer himself could have known just how extensive this watches connection with the F1 Grand Prix and the racing community would become.

Heuer’s Monaco featured the chronomatic or Calibre 11 movement. Designed in honor of the most esteemed and popular F1 race, the Monaco Grand Prix, this watch was made with the intention of paying tribute to the sport of racing and has since become the watch that is most synonymous with F1 and racing in general. The Monaco is known as one of the most recognizable and iconic watches in watchmaking, but it wasn’t TAGs first contribution to the racing community – let’s explore how that came to be and learn more about its unique history.

Shortly before the release of the Monaco model, Jack Heuer partnered with his friend and Formula 1 driver, Jo Siffert. Siffert was a fan of the watches, and became the very first brand ambassador to TAG Heuer. Then, in 1970, Jo Siffert was serving on the set of Le Mans (McQueens big upcoming movie about F1 racing) to help McQueen portray an accurate role. At the request of McQueen, Siffert allowed him to use his white racing suit that featured a TAG Heuer emblem. While Siffert generally wore an Autavia model, McQueen chose the Monaco 1133B to complete his look in the film. And thus, the McQueen Monaco was born and history was made.

After filming, Steven McQueen returned home and gifted one of the Monacos he wore on set to his financial advisor Bill Maher who brought McQueen and Solar Productions Inc. (his production company) out of debt and through financial difficulties on set. A total of 6 identical Monaco watches were used on set. McQueen took 2 of these, gifting one to his financial advisor and one to the on-set mechanic, Haig Alltounian. When Alltounian tried to decline the gift, McQueen told him that he could not because the watch had already been engraved “To Haig Le Mans 1970.”

Where Are the Original Mcqueen Monacos Now?

Of the 6 watches on the set, 3 have been sold publicly at auction. The first, Bill Maher’s watch, was sold in 2009 for $87,600. In 2012, a Monaco used for still photography for the film was sold at a Hollywood auction for $799,500. And more recently, in 2020, Haig Alltounian sold his gifted watch for a record-setting 2.2 million at a Phillips online auction, shattering all records for TAG Heuer watches at auction. TAG Heuer maintains two of these original McQueen Monacos in the TAG Heuer Museum in Switzerland, and 3 of them are on record as being owned by private collectors, maybe never to be seen again, so the massive price point on the Haig model seems about right when you consider that it may be the last one to ever be sold at auction. Not only that, but the fact that Haig the mechanic maintained a personal relationship with Steven McQueen after the film and held ownership of the watch himself for all these years only adds greatly to the value.

The Progression of TAG’s Monaco Through the Years

In the mid 1970s due to falling out of favor with the public, Tag discontinued the production of the Monaco, and it would sit dormant for almost 30 years. Then, in 1997 we received the relaunch using the Calibre 17 movement and plexiglass crystal, but it wasn’t until 2003 that they re-released a blue dial watch that resembled the original McQueen Monaco from 1969.The Monaco Sixty-Nine was released in 2004, featuring a reversible case that was analog on one side and digital on the other, and a twisting mechanism that allowed you to flip the case without removing the watch. 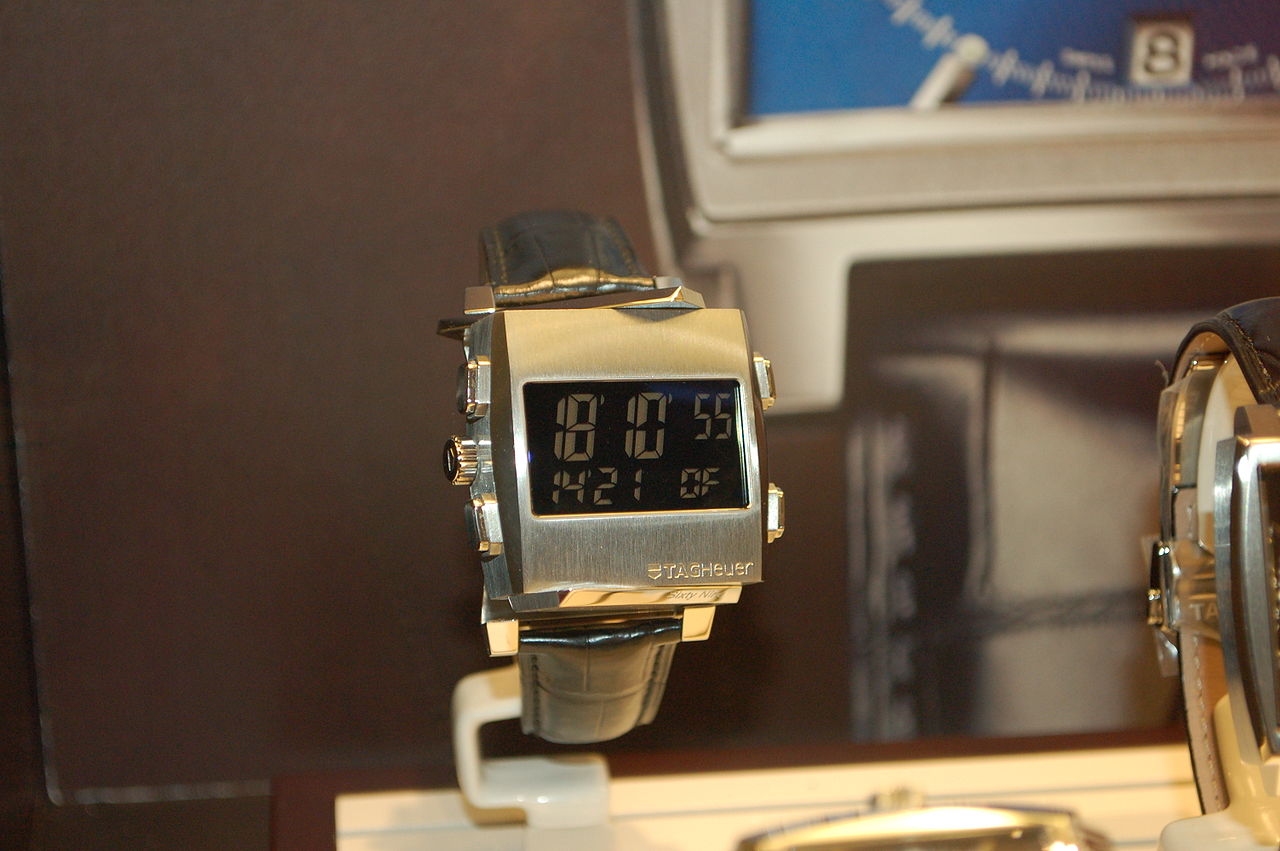 In 2009, the 40th anniversary edition Monaco received a limited release of only 1,000 models and paid direct homage to the original McQueen Monaco with color and design. This watch featured a larger 39mm case, as well as a clear caseback. 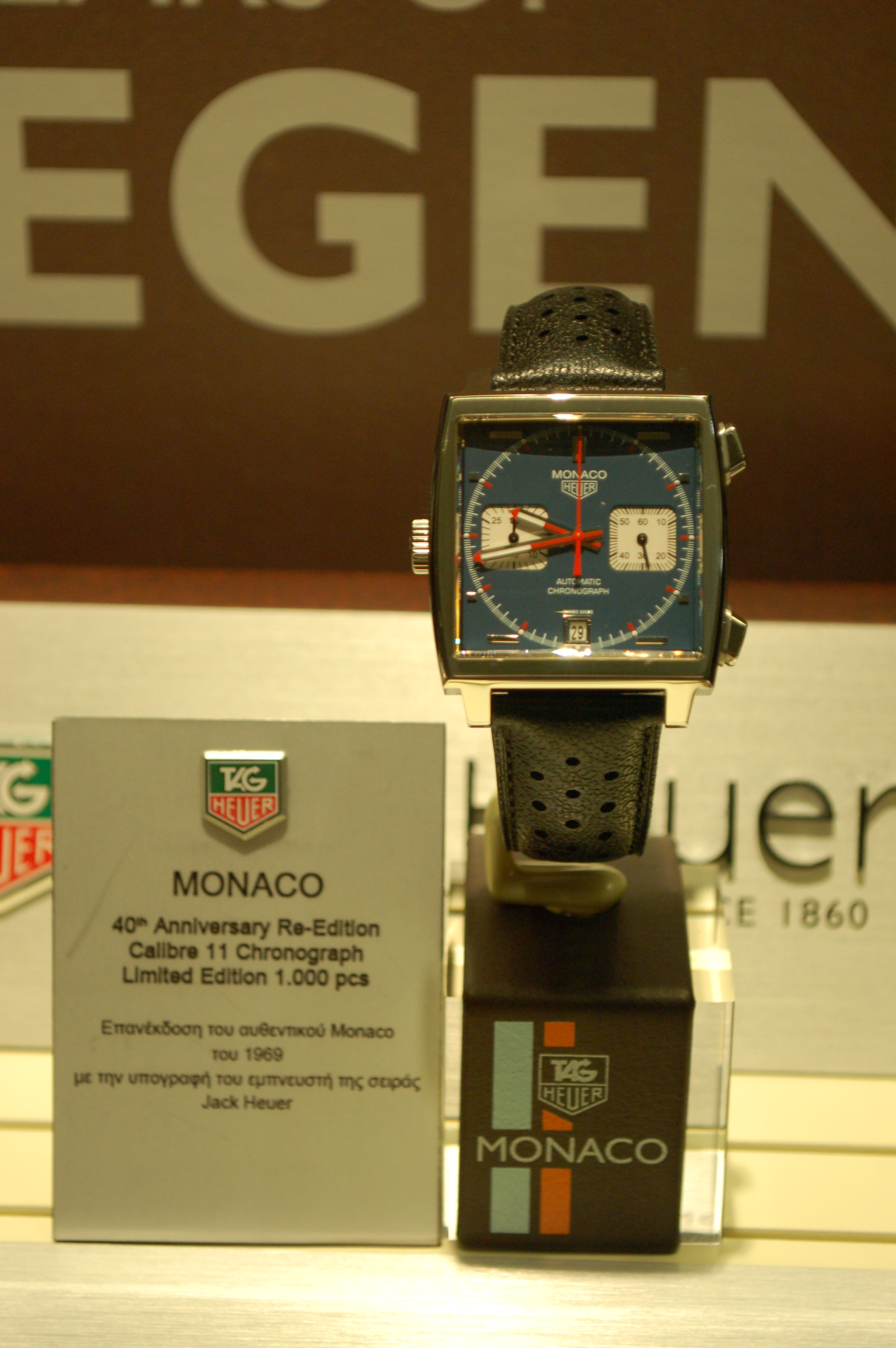 In 2015, the new Calibre 11 Monacos were released. These models were very similar to the 40th edition models, with only a few differences left as clues to tell the models apart. If you were looking for something that closely resembled the watch used on the set of Le Mans, this was the watch for you. 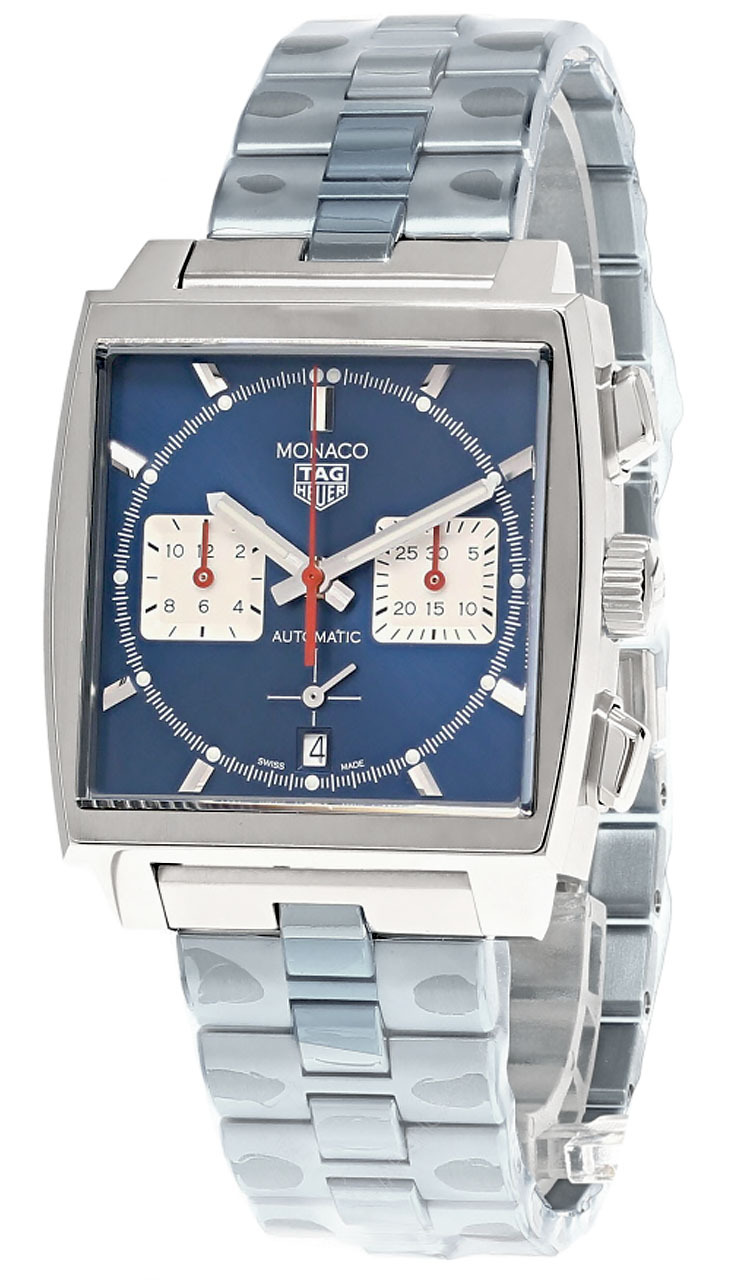 The 50th anniversary edition Monacos were released in 2019, adding 5 unique color schemes never seen before, bringing a touch of modernism to the classic Monaco design. 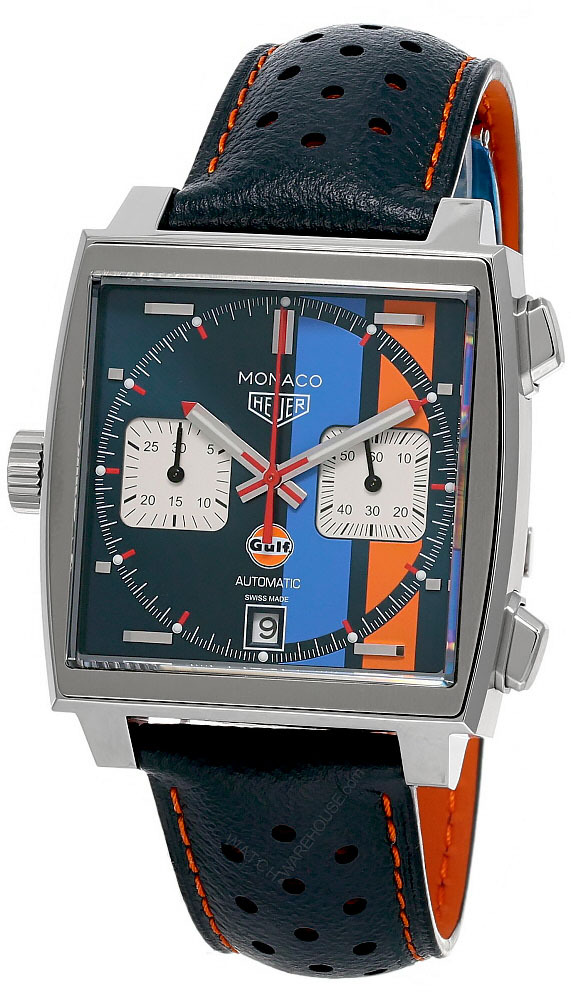 Most recently, in 2021, the Monaco Titan was released with a titanium case. Prior to that in 2018 a carbon-case edition was released known as the Bamford Carbon.